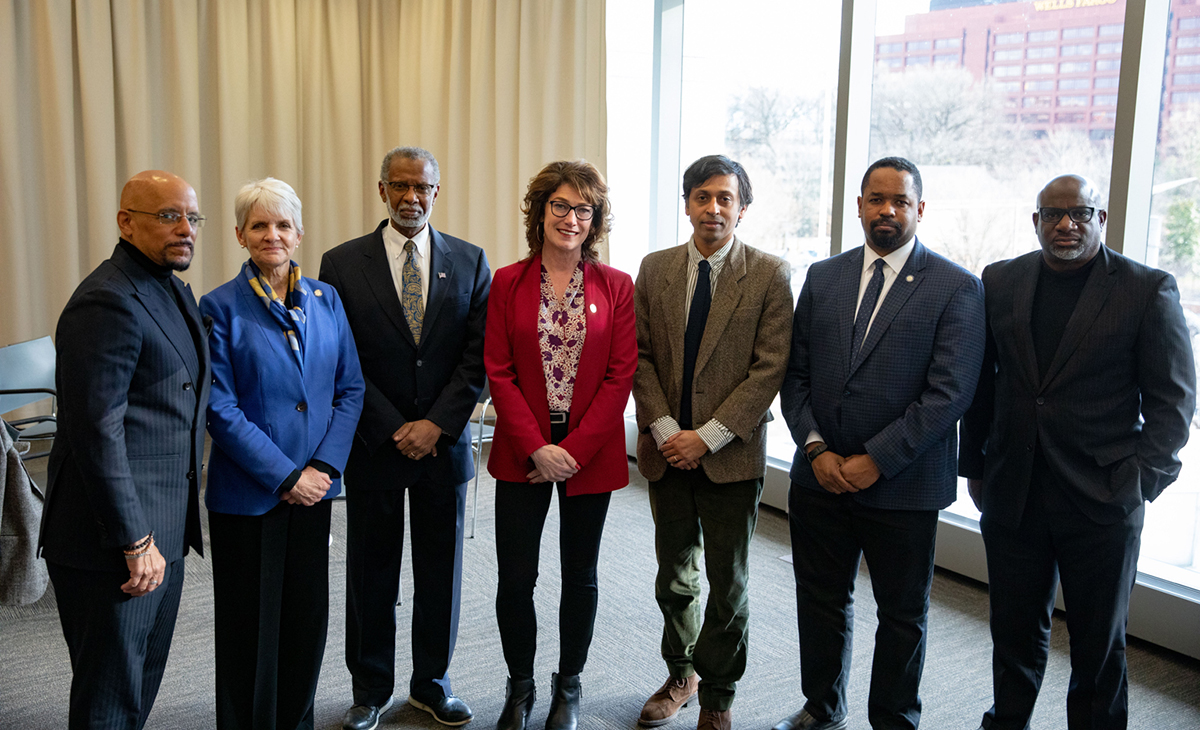 Following the pledge of allegiance to the U.S. flag, Rev. Mark Kelly Tyler, pastor of Mother Bethel African Methodist Episcopal Church in Philadelphia, delivered the invocation prayer, and later a benediction to close the event.

Sen. Haywood opened the press conference by paying homage to first responders, who fought attackers and helped lawmakers, family members, and staff to safety. He also recognized members of Congress who stood their ground and survived the tragic day.

At 2:11 p.m., which is the same time that rioters breached the Capitol on Jan. 6, 2021, Haywood asked for a moment of silence for the people who lost their lives, either during or after the attack.

“Today, we remember the nine people who died as a result of injuries sustained during the Jan. 6 attack, or subsequent to it, including 5 police officers,” Haywood said. “We honor the 140 injured police officers and commend the brave Congresspersons who persevered and made sure that Congress counted the votes of all citizens in the 2020 election.”

Sen. Hughes, who hosted a press conference outside of the National Constitution Center in 2022, returned today to condemn the Jan. 6 events. “As we continue to heal from the heartbreak our nation suffered on this day two years ago, may we never forget the heroic first responders who stood their ground on January 6th to protect our democracy,” Hughes said. “Those who sadly lost their lives shall be forever immortalized for their bravery and commitment to our country as they stood up to the mob of insurrectionists.” Hughes continued: “In the memory of the fallen, my colleagues and I continue to take a stand against hate and division, and we remain committed to upholding our free and fair elections across the commonwealth and beyond.”

Event co-sponsors Sen. Saval and state Rep. Isaacson shared the importance of hosting the event in Philadelphia within their respective districts.

First, Saval stressed the importance of holding supporters of the Jan. 6 attack accountable. “Today, on the second anniversary of this insurrection, we stand shoulder to shoulder fighting for a world in which work is honored with dignity and just compensation; in which a home is not a luxury but a right; in which schools are fully funded centers of resilience; in which every single person and every single community has what they need to thrive,” Saval said. “The architects of the efforts to collapse our work for democracy—Trump and his allies and enablers—to this day have not been held accountable for their harms.” Saval continued: “This accountability must come, and we must continue, as we have done, to protect each other’s voices, fight for each other’s safety, and hold strong to protect each other’s rights.”

Second, Isaacson encouraged the protection of our democracy. “Today, we stand in Philadelphia, in the birthplace of our nation, to not only remember and pay our respects to the heroes who lost their lives in the attack on our U.S. Capitol, but to also remember and honor the principles our country was founded on – values that stand in stark opposition to those who rioted and threatened our working legislative body, the history of this country, and the results of a fair and transparent election two years ago today,” Isaacson said. “We must never forget these destructive and horrifying actions taken against our country as we continue to rebuild our democracy.”

For this nonpartisan event, the senators extended an invitation to all members of the Pennsylvania State Senate and the Pennsylvania House of Representatives. Sens. Carolyn Comitta (D-Chester) and Sharif Street (D-Philadelphia) attended the commemoration in support.

Evans said: “January 6 has become a day not only to remember an unprecedented attack on our democracy, but also to honor those who risked their lives to protect it, and to give thanks that our democracy endures. Benjamin Franklin said after the Constitutional Convention in Philadelphia in 1787 that we have ‘a republic, if you can keep it.’ We can keep our republic by being involved and informed citizens, and using our hard-won right to vote, never taking it for granted.”

This week, Haywood introduced Senate Resolution 8 in the 2023-2024 session to all Senate members. During the press conference, he provided specifics of the legislation, which honors those who sacrificed their lives on Jan. 6, 2021, and stood against rioters.

The concurrent resolution proposes the following:

Haywood also plans to introduce a second resolution to call for observance of Jan. 6 in schools across Pennsylvania. State Rep. Chris Rabb (D-Philadelphia) and state Rep. Ed Neilson (D-Philadelphia) will introduce a companion bill for this legislation, which would establish Jan. 6 day in commonwealth schools, so as to ensure those who sacrificed their lives to protect our democracy from violent insurrectionists on that fateful day are not forgotten.

“This legislation is about embracing truth and being a country that is actively engaged in fighting systems of oppression,” Rabb said. “This moment demands reconciliation with a clear-eyed and honest assessment of what it will take to get back on the path toward atonement and healing that we so desperately need.”

Video of the commemoration is available at senatorhaywood.com/video.