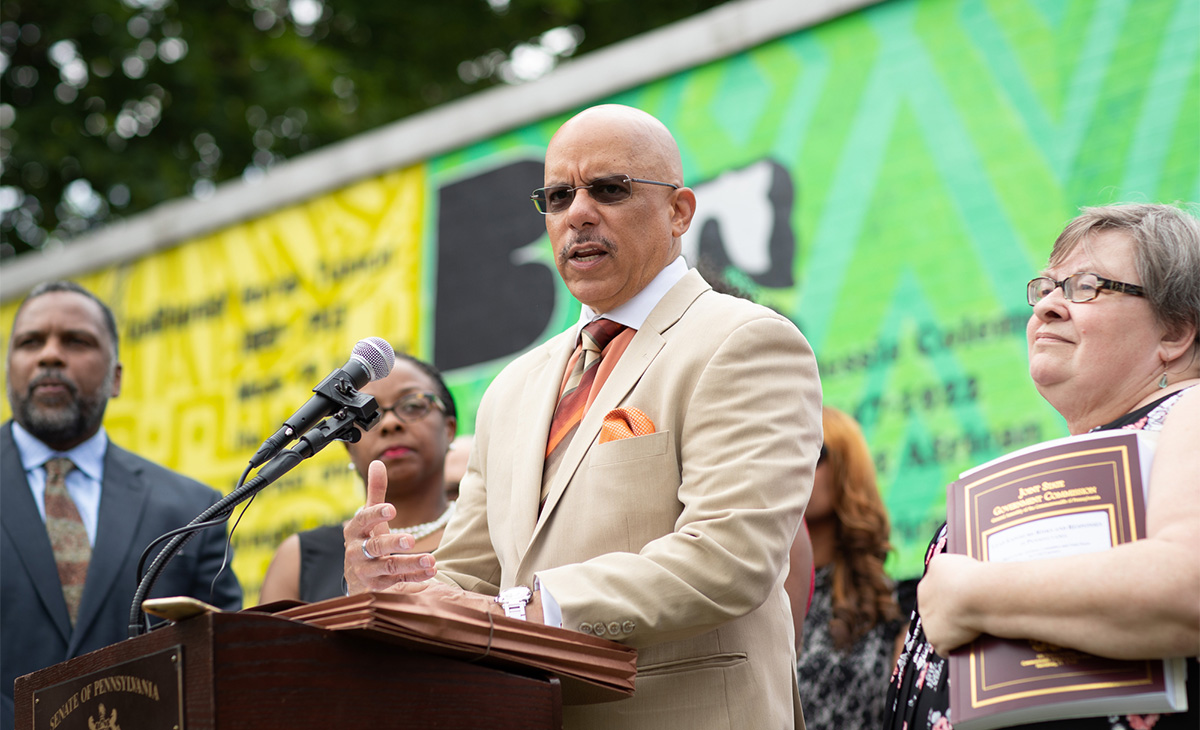 PHILADELPHIA – June 14, 2019 − In response to an in-depth report by the Joint State Commission Report on Lead Risks and Exposure in Pennsylvania, State Senator Vincent Hughes (D, Philadelphia/Montgomery County) convened a gathering of fellow elected officials, world-renowned pediatricians and other home health officials, to call for immediate legislative action to address the issue of toxic lead in public spaces–particularly public schools and public buildings–throughout the Commonwealth of Pennsylvania.

Standing outside of the Philadelphia Department of Health: Health Center 4 and flanked by a group of pediatricians and home health workers, Senator Hughes laid out his case for taking action on toxic lead across the Commonwealth.

“Though we’re gathered in Philadelphia, the lead issue is a problem that has been documented in every part of the state,” said Sen. Hughes, pointing to a Joint State Government Commission report on lead.

The report, published in late April 2019, explains the high lead risks in Pennsylvania schools and other public spaces across the state. It also highlights the need for immediate action and features several legislative recommendations, many of which Senator Hughes and his colleagues have used to draft upcoming legislation. (READ THE REPORT)

Friday’s event featured a large group of medical professionals, predominantly pediatricians, who were invited to share their personal stories of the horrors of lead poisoning in children.

“I have the pleasure of working every day with young children who have the potential to be doctors, lawyers, or even the president of the United States of America,” said Dr. George Dalembert, Chief of Residency for pediatrics at the Children’s Hospital of Philadelphia. “However, far too often, I see those potentials stripped away. Lead is an insidious problem that robs children of their potential.”

Erin Blair, a home health care nurse, described a typical day for many of the young people she serves in the community.

“I see kids who wake up in home filled with lead, they drink the water from lead pipes, walk streets filled with dust, and arrive at schools where lead paint is chipping, and asbestos is falling from the ceiling. They are living in an inescapable nightmare filled with toxins.”

Senator Hughes, who has been urging fellow lawmakers to support several lead-focused bills, pointed to the Joint State Government Commission report as a guide for many possible solutions. He closed out the press conference by highlighting lead remediation efforts in Baltimore, which was able to reduce the number of lead-related cases in children by 99% over a 12-year period.

“I don’t want the Phillies to be like the Orioles or the Eagles to be like the Raves, but I want Philadelphia to be like Baltimore!” said Hughes. “Especially when it comes to this issue of lead. Their example shows that this is possible. We can do better than they did in Baltimore and we will.”