PHILADELPHIA, September 25, 2017 — To dig deeper into growing concerns with respect to voting in Pennsylvania, provide an update on national issues around voting and discuss a package of legislation calling for greater voter access in Pennsylvania, state Sen. Vincent Hughes plus local, state and federal elected officials will be convening a forum on voting this Friday in Philadelphia. 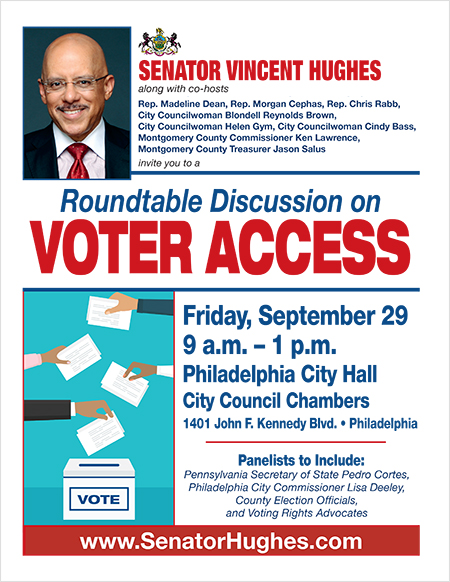 “We hope to get clarity on any problems that have occurred in recent Pennsylvania elections. These include the recent revelation of the Russian attempt to hack Pennsylvania’s election system. We will also examine local and national attempts to block people from voting, get an update on efforts to increase access to voting, and secure additional support for the voter access package of bills introduced in Harrisburg,” Hughes said.

Panelists will include members of the Keystone Votes Coalition, who produced a report earlier this year entitled, “Lost and Late in 2016: Why thousands of Pennsylvanians weren’t able to cast a ballot at their poll on Election Day;” Pennsylvania Secretary of State Pedro Cortes; Barbara Arnwine, president of the Transformative Justice Coalition, former Executive Director of the Lawyers Committee for Civil Rights Under Law, and a national Voting Rights expert; and more.