The first marker highlighted in this campaign was the Pennsylvania Slave Trade Marker at Penn’s Landing in Philadelphia, which outlines the history that brought African slaves to the commonwealth. PHMC will continue to share highlights from Pennsylvania Historical Markers dedicated to African Americans, as well as their contributions to Pennsylvania’s rich and diverse heritage through February 2020. The #400yearsPA project is a part of a broader national initiative to honor African American History in the U.S. 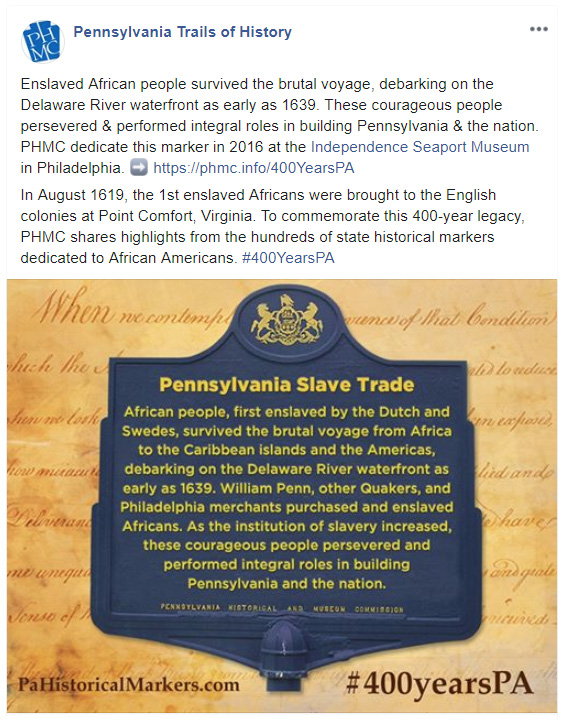 “This is an incredibly important project that serves as a reminder to the legacy of African Americans and our continued accomplishments in the commonwealth,” Sen. Hughes said. “It also provides an educational tool for people who may not know about the rich history Pennsylvania holds. Pennsylvania is home to the two oldest Historically Black Colleges and Universities in the nation. It was the location for many critical moments in the fight for equality. It continues to house many churches that serve as spiritual strongholds in the African American Community. We are hopeful the #400YearsPA project helps inform the public of the many more important people, places and events that have ties to Pennsylvania.”

Sen. Hughes met with PHMC officials in the spring of 2019 to discuss ways to honor the 400-year history of African Americans in Pennsylvania. During the meeting, he suggested a similar campaign to that of the existing 400 year campaign, which honors the history on a national level. PHMC created a social media campaign around the more than 200 existing markers in the commonwealth. The recognizable blue-and-gold roadside markers introduce travelers to the people, places, events and innovations of African Americans in 35 of the commonwealth’s counties.

Each week PHMC will feature selected stories to highlight the multifaceted African American experience across Pennsylvania and will include both well-known and lesser-known people, places and themes. PHMC will share these over its social media platforms—Facebook, Twitter, Instagram and LinkedIn—and encourages its followers to share these posts using the hashtag #400yearsPA.

“The #400YearsPa project will act as a portal to the long and deep history of African Americans in PA and will complement the other important projects documenting our history around the country and around the world,” Sen. Hughes said. “Our people need to know about the role of African Americans in Pennsylvania, and we must to spread the word of this project so that its impact is felt in every corner of the commonwealth. I thank the Pennsylvania Historical and Museum Commission for following through on this initiative, which is extremely necessary in our current climate.”

Pointing to national efforts to share the history of African Americans, Senator Hughes said he hopes #400YearsPA is a compliment to existing campaigns, including the 1619 Project by the New York Times Magazine and its remarkable storytelling, which begins with the first enslaved Africans who were brought to the English colonies at Point Comfort, Virginia on August 25, 1619.

In addition to telling the stories represented on historical markers, PHMC is continuously working to document and interpret African American history in collections at the Pennsylvania State Archives and through experiences at The State Museum of Pennsylvania and along the Pennsylvania Trails of History.

The 400 Years of African-American History Commission Act was signed into law January 8, 2018. The law established a 15-member commission to coordinate the 400th anniversary of the arrival of the first enslaved Africans in the English colonies. The vision of the commission is to ensure that Americans of all ethnicities will be more aware of the immense sacrifices and prodigious contributions made by African Americans to our nation over the course of the last 400 years.

The Pennsylvania Historical & Museum Commission is the official history agency of the Commonwealth of Pennsylvania. Learn more by visiting PHMC online at www.phmc.pa.gov or following them on  Facebook, Twitter, Instagram and LinkedIn.