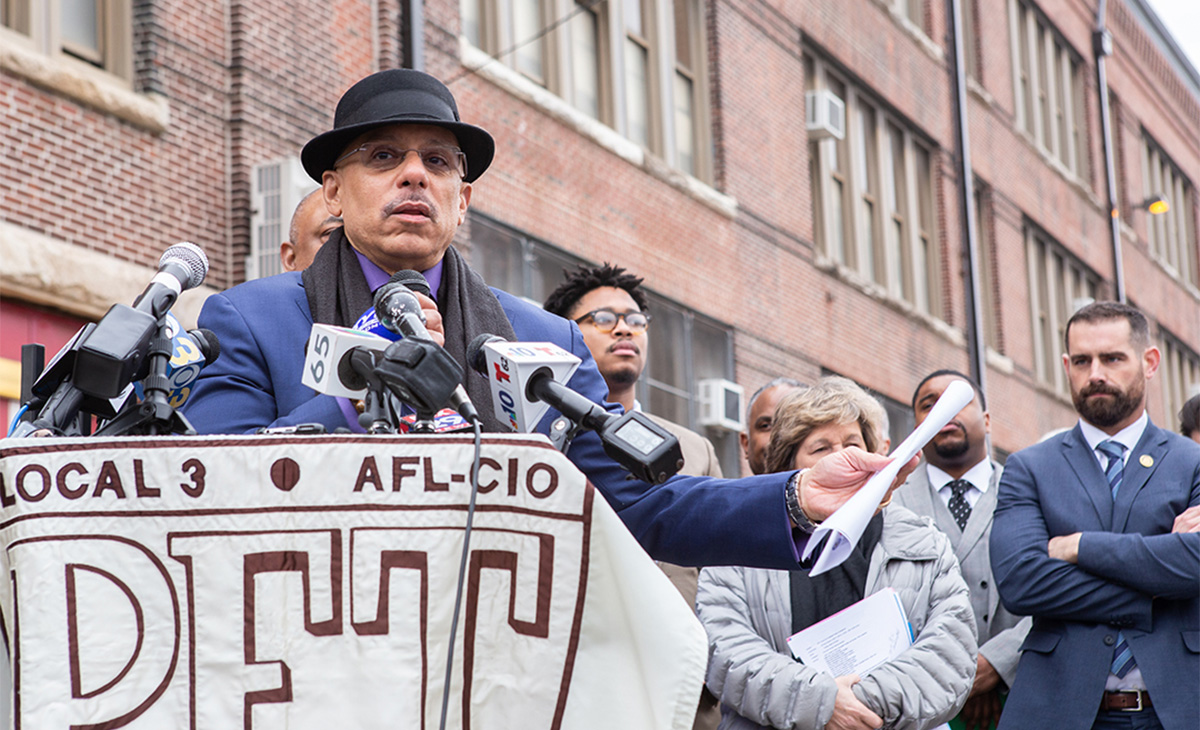 PHILADELPHIA − March 29, 2019 – Today, Senator Hughes joined a broad coalition of union leaders and elected officials convened by the Philadelphia Federation of Teachers. The group gathered at F.S. Key Elementary School to propose an immediate investment of $170 million to make immediate, critical repairs to Philadelphia’s school buildings. The coalition’s proposed investment is separate from the billions needed to bring every school building to the standards found in nearby, wealthier school districts.

“The PFT convened this coalition of elected leaders and community partners because we know it’s not enough to simply call attention to the inhumane school building conditions faced by too many of our children and educators,” said PFT President Jerry Jordan, “We must also have a comprehensive plan to immediately address the environmental hazards plaguing our schools.”

The Fund Our Facilities Coalition concedes that it will take years and billions of dollars to completely repair every school building in the District. But for $170 million, environmental hazards can be effectively remediated throughout Philly’s 200+ school buildings.

The proposed $170 million would be used to address issues created by the age of our buildings and deferred maintenance, including more school cleaning and maintenance staff; rodent and pest control; remediation of asthma triggers; accelerated and expanded lead paint stabilization; repair of water leaks; electrical & lighting upgrades; bathroom upgrades; and window replacement.

The PFT Health & Welfare Fund arrived at the $170 million figure after doing an analysis of the most prevalent and critical health and safety issues present in Philadelphia’s schools.

“We’re not just calling for this immediate investment,” said Jordan, “We have a plan to ensure that these funds are invested in repairs that will make our schools, safe, clean and healthy for schoolchildren.”

Though in its infancy, the Fund Our Facilities Coalition has already received enthusiastic support from state and local elected leaders, many of whom have been on the front lines in the fight for K-12 education and infrastructure spending.

Newly elected PA Representative Elizabeth Fiedler represents the South Philadelphia neighborhood where the Key School–one of Philly’s oldest school buildings–is located. “The current conditions are unsafe, unhealthy and unjust,” she said, “In a professional workplace, these dangers would be swiftly addressed. Our children are valuable, and they deserve to learn in a clean, safe building. That is not too much to ask.”

“The issue of toxic schools has plagued the city of Philadelphia for far too long,” PA Senator Vincent Hughes said. “We’ve had the data, we’ve seen the images, and now we know exactly how to fix our problems. Though the Fund our Facilities Coalition shouldn’t be necessary, I’m nonetheless grateful to be part of this wonderful group of concerned leaders fighting to bring about a positive change.”

PA Senator Larry Farnese noted that “Students have the right to safe and secure places to learn, but our schools are literally falling apart before our eyes. I will continue to fight for increased school funding and supplemental dollars to repairs and upgrade school facilities.”

Representative Jason Dawkins (Chair of the Philadelphia Delegation in Harrisburg) noted the economic disparity of this issue. “Far too often, we find that our poorest school districts are having a facilities crisis, in some cases literally poisoning our children,” Dawkins said, adding, “Any organization or effort to improve Philadelphia school infrastructure has my full support.”

“The urgent need for safe, healthy learning spaces for children cuts across political parties and municipal boundaries in all 67 counties of the Commonwealth,” said Council President Darrell Clarke, “Whether motivated by morality or by a desire to reduce impact on taxpayers, safe and energy-efficient facilities are in the public’s best interest.”

Councilmember At-Large Derek Green said, “You cannot put a price tag on anyone’s health or wellbeing.” Green pledged to work with fellow Councilmembers, state legislators and “other members of the Fund Our Facilities Coalition to do whatever is necessary to ensure the safety and success of every child, educator and employee in our schools.”

“As a parent, an elected official and a former teacher, I am appalled that we send our children to learn in toxic buildings that are falling apart,” Councilmember Cherelle Parker said, “This is not a Democrat or a Republican issue – this problem affects families across the Commonwealth, in rural, urban and suburban settings alike. ”

District 1 (South Philly) Councilmember Mark Squilla also committed to working with the coalition to ensure the cleanliness and safety of school buildings, adding that “These measures are just the beginning of what we must do to improve the condition of our school facilities.”

“We need meaningful investments in our school facilities so that they don’t continue to put the health of children and educators at risk,” Gym said, “We have an opportunity to put our facilities crisis at the forefront of the budget cycle to invest in schools, jobs and our future.”

Fund Our Facilities is a local component of the American Federation of Teachers’ (AFT) national “Fund Our Future” investment agenda for public schools. AFT President Randi Weingarten was also at Key to voice her support for the coalition and echo the group’s call for immediate school facilities funding.

“Philadelphia’s educators and their allies are leading this fight for immediate, critical investments because the catastrophic underfunding of this city’s schools is putting our kids and our teachers in danger, and it’s time we prioritize their future…by funding it,” said Weingarten.

Fund Our Facilities was founded on the principle that every child in Pennsylvania and across the nation deserves a quality education, and safe, healthy learning environments. Deteriorating building conditions are not just a Philly problem, coalition members say, emphasizing the need to support efforts to fix school buildings in other cities and states–even after Philadelphia’s schools are modernized.

This coalition of leaders is under no illusion that $170 million will fix what ails Philadelphia’s school buildings. Jerry Jordan and other members noted that permanently fixing schools will require a much higher level of sustainable infrastructure investment. But, Jordan notes, something must be done immediately to address the threat to the health and safety of Philly’s educators and students.

“The billions of dollars in deferred maintenance in our schools is daunting, but the very fact that children are being poisoned in their classrooms should horrify and move us all to immediate action,” Jordan said. “I’m confident that the Fund Our Facilities Coalition will continue to grow as more city, state and federal legislators realize the urgency of the crisis facing our schoolchildren.”