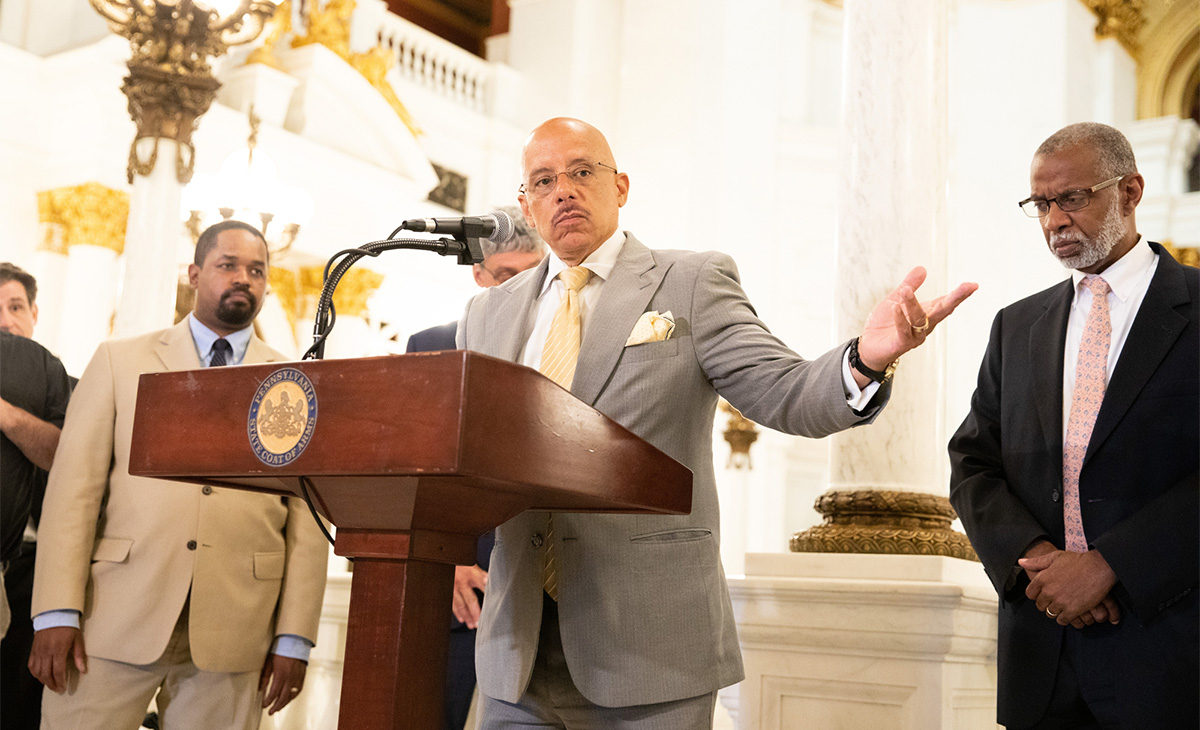 Harrisburg – June 24, 2019 – Health and Human Services Committee Democratic Chairman State Senator Art Haywood (D-Montgomery/Philadelphia) joined members of the PA General Assembly and statewide advocates to fight to protect the General Assistance program. House Bill 33, which is now in the Senate for consideration, would eliminate the program which provides cash assistance to those who are in urgent need.

“The General Assistance program is a last resort for folks who have nowhere else to turn, many of them are seeking substance abuse treatment, living with a disability, or fleeing domestic violence situations,” said Senator Costa, Democratic Leader of the PA Senate. “I am not proud of what it says about us as a state if we turn our backs on the people who need us most.”

“I am alive today because General Assistance is supporting my stability and helping me live independently again after being homeless for 25 years. In four weeks, it will be two years since I first applied for [SSDI] help,” said John Boyd, General Assistance recipient. “General Assistance is the only money I have to buy deodorant or anything that is not food. The $205 dollars a month is a lifesaver.”

The proposed elimination of General Assistance by Republicans abandons the most vulnerable amongst us, and is a departure of our most fundamental responsibility as a government, the protection of the people of our commonwealth,” said Senator Street. “This will imperil the livelihood of our veterans, the disabled, those suffering from chronic disease and more. As a caucus we will use every means available to us to prevent this from happening.”

“As a program that primarily serves individuals with disabilities, General Assistance is a critical bridge between that disability and self-sufficiency. The Pennsylvania Health Access Network is a statewide organization on the frontlines of helping individuals with their healthcare needs,” said Antoinette Kraus, Executive Director of the Pennsylvania Health Access Network. “Eliminating this program jeopardizes the health and well-being of individuals who cannot work due to their disability and have no other means of support. We strongly urge lawmakers to preserve this program, vote no any legislation that ends the program, and fund General Assistance in the budget.”

“Community Legal Services urges Senators and the Governor to hear the voices of those who do not often reach the Capitol: those who are served by General Assistance. This small and targeted program reaches people in every county who are disabled, fleeing domestic violence, or who are completing treatment for substance use disorder,” said Maria Pulzetti, Attorney at CLS. “Most people receive GA for less than one year. My clients use GA to stay housed, to get to medical appointments, and to do laundry.”

“Just Harvest works to build an accessible and fair system where people can meet their basic needs. General Assistance isn’t a lot of money, it’s only $200 a month. But it’s a bus pass, toiletries, just enough to access county housing or pay a friend to stay on their couch without putting them out. It’s not much, but it’s some stability and some dignity in a difficult time,” said Ann Sanders, Public Policy Advocate at Just Harvest. “General Assistance is small, but it’s a critical lifeline for people who are weathering some of the worst of life’s storms. In all budgets, but especially a budget season where we hear the words surplus and talk of putting cash in the Rainy-Day Fund—we have to remember that it’s still raining for a lot of Pennsylvanians. We have to fully fund General Assistance.”