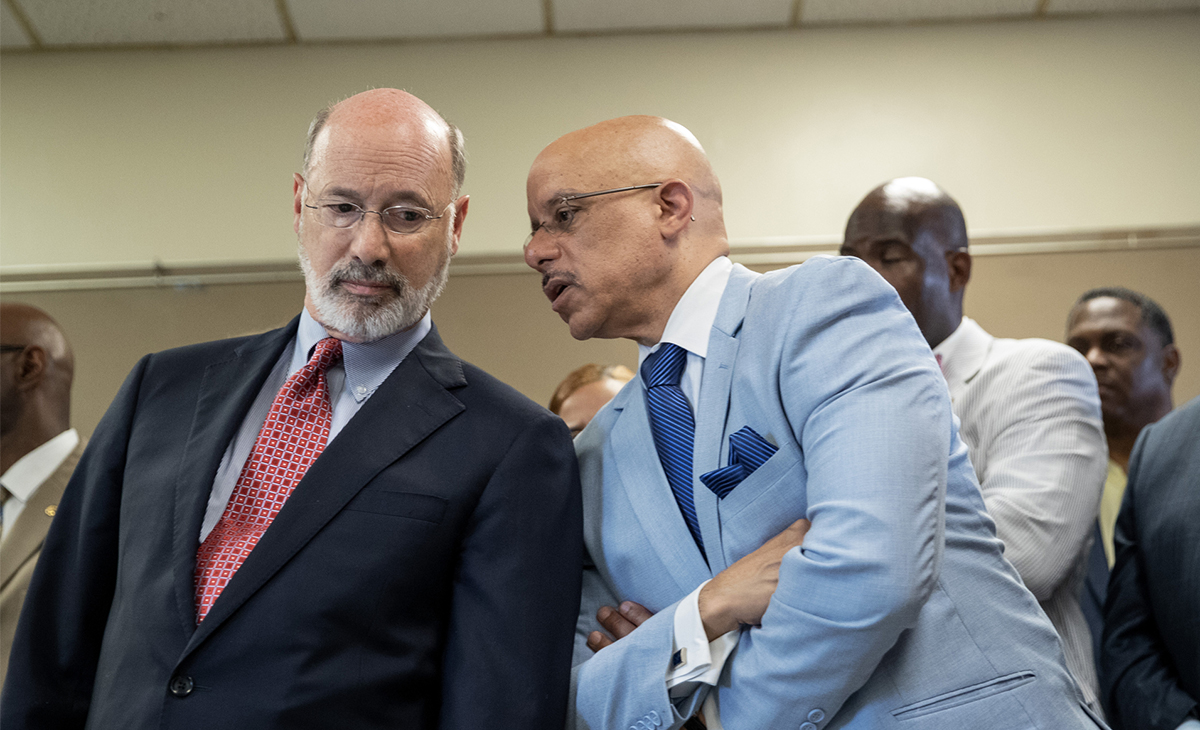 Philadelphia, PA – January 22, 2020 − Governor Tom Wolf today outlined how his 2020-21 budget further demonstrates his commitment to protecting the most vulnerable Pennsylvanians by proposing to expand comprehensive training for direct care workers, reduce waiting lists for care, and increasing staff in specific service areas, including child welfare, among other key investments. The governor was joined by Senator Vince Hughes, Secretary of Aging Robert Torres, Executive Director of the Office of Advocacy and Reform Dan Jurman, and Denise Major, a homecare aide, for the announcement at the Inglis Innovation Center in Philadelphia.

“Pennsylvania has a long history as a leader in caring for its vulnerable residents, including children, seniors, veterans, adults facing domestic violence and Pennsylvanians of all ages with mental health concerns or physical or intellectual disabilities, or other challenges,” Gov. Wolf said. “Every Pennsylvanian deserves an opportunity to thrive and that’s why making investments in our services for vulnerable populations is a priority of mine for the upcoming budget.”

Supporting Adults with Disabilities in Long-Term Care Facilities
By proposing an adjustment in the eligibility criteria for the Ventilator Dependent Resident Grant Program from requiring at least 8 hours per day of ventilator support to any pressure support ventilation and increasing the list of supplies that are reimbursable, relief will be provided to nursing facilities and access to these critical services will be maintained. This includes a proposed investment of $1.4 million into the program.

Legal Services for Vulnerable Populations
Additional funding of $1 million will be proposed to expand the legal services program that provides legal assistance to low-income individuals and families who are unable to afford necessary legal services from the private sector. Such services include emergency protective services for victims of abuse without consideration of income and consultation, advice, assessment, negotiation, and representation for clients under 125 percent of the federal poverty level.

Direct Care Worker Comprehensive Training
A new investment of $1.2 million would enhance the current direct care worker training to support the workers and those receiving long-term services and supports as recommended by the Governor’s Council on Reform. According to the National Association for States United for Aging and Disabilities, the growing use of home and community-based services in lieu of institutional services, as well as the growth of the aging population, has increased demand for direct care workers. To support the growing population of individuals becoming eligible for long-term care services, however, the number of individuals performing this work needs to increase. One strategy to address the direct care worker crisis is through a standardized core training and credentialing system for direct care workers in the Participant Directed Model, which will provide career pathways throughout the continuum of long-term services and supports.

Commitment to Performance-Based Metrics, Accountability and Transparency in Services and Licensing
Additional administrative funding of $4 million is proposed for counties to support individuals with intellectual disabilities and/or autism living in the community by better equipping counties with resources needed to ensure better risk management and independent incident investigations to better serve this vulnerable population.

Additional staff funded by a proposed $5.1 million budget increase will be provided to several program areas within the Department of Human Services (DHS) to support increased workloads and complete timely inspections of facilities to ensure full compliance with regulations, investigate complaints, and monitor the implementation of corrective action measures, as directed by the Vulnerable Populations Executive Order and as recommended by the Council on Reform.

Supporting Vulnerable Populations through Home and Community-Based Services and Reducing Waiting Lists
Continuing the commitment to serve individuals in the community, $1.25 million is proposed for 20 Community Hospital Integration Projects Program (CHIPP) discharges to reduce the state hospital populations. The program is targeted for individuals ready for discharge but for whom community resources or programs are not available to support a successful transition to the community. Through the CHIPP, the mental health programs have been able to enhance their systems and develop additional community-based services which are intended to divert individuals from going back to a state hospital.

Pennsylvania continues to see an increase of individuals eligible for long-term services and supports and increased need for protective services for older adults. To address the growing need, the 2020-21 budget will provide services to 1,700 people on the OPTIONS in-home services waiting list with $8.1 million in new funding.

The 2020-21 budget proposes to move 732 individuals with an intellectual disability and/or autism from the emergency waitlist into the Community Living Waiver and 100 individuals into the Consolidated Waiver. The $15 million investment will provide community services to people with unanticipated emergencies, people transferring from private intermediate care facilities, or state hospitals. As recommended by Governor Wolf’s Council on Reform, this initiative will include moving up to 40 children with complex medical needs into the Community Living and Consolidated Waivers to support their transition from congregate care settings ensuring they have an opportunity to live and grow up with their families in their own home.

With the announcement of the closures of Polk and White Haven State Centers, DHS is working to transition individuals to community homes. In order to meet the unique needs of residents with the highest acuity, start-up funding is proposed in the budget for property acquisition and/or modification necessary for many residents to transition to the community.

Resources for Organizations Best Positioned to Steward Change in the Community
A proposed investment of $1.3 million in the Court Appointed Special Advocate (CASA) Program would support court-appointed volunteer advocacy in communities so that children who have been victims of abuse or neglect can be safe, establish permanency, and have the opportunity to thrive. Local CASA programs recruit, screen, train, and supervise CASA volunteers appointed through dependency court for children facing abuse and neglect.

DHS will also propose expansion of a newly established home visiting initiative through the Medicaid managed care organizations that will provide in-home visits for new parents with an additional $1.4 million in state funds. Evidence-based and evidence-informed home visiting family support programs have a family-centered focus and strength-based approach that works with both the child and parent. Studies of various home visiting programs have shown positive impacts for the mother and baby during pregnancy and after birth, such as a decrease in domestic violence and smoking during pregnancy, a significant decrease in pre-term births, and a majority of babies being born at a healthy weight.

Improving Food Security while Supporting Agriculture
An additional investment of $1 million in the Pennsylvania Agricultural Surplus System (PASS) would further address food insecurity in Pennsylvania and ensure more Pennsylvanians have access to healthy meals for their families. Through PASS, the Department of Agriculture provides funding to cover the costs associated with harvesting, processing, packaging, and transporting surplus products including fruits, vegetables, eggs, dairy, meat, and grains in order to donate those items to the charitable food system. Current funding has allowed healthy and nutritious surplus food to be brought into the charitable food system to nourish 1.6 million Pennsylvanians who struggle to put food on the table.

The Council on Reform emphasized the need to expand and better train staff who work with vulnerable populations. Sec. of Aging Robert Torres detailed how the $1.2 million for a new direct care worker training program will help Pennsylvania’s senior population.

“When direct care workers leave their profession, we all lose,” Sec. Torres said. “High turnover robs us of their experience and expertise, and compromises continuity of care for the older adults and individuals with disabilities that they serve. This is why the governor’s call for $1.2 million in funding for direct care worker training is so important. With a standardized core training and credentialing system for direct care workers, we can provide career pathways throughout the continuum of long-term services and supports, helping with recruitment and retention of direct care workers to better support vulnerable populations.”

The Office of Advocacy and Reform was created as part of the vulnerable populations executive order and Executive Director Dan Jurman discussed the need for staff to support frontline employees.

“The Office of Advocacy and Reform is in the process of hiring our Child Advocate and is creating a blueprint to make Pennsylvania a trauma-informed state,” Jurman said. “We don’t just mean to raise the bar for how our most vulnerable citizens are treated in Pennsylvania, but in the nation.  That will take all of us working together to make sure we build a Pennsylvania that doesn’t leave anyone behind, no matter what hand life has dealt them or what challenges they’re overcoming.”

Also joining the governor was Senator Vince Hughes, who focused on the legislature’s role in protecting vulnerable populations.

“Today’s announcement sends the message that Pennsylvania is here for its most vulnerable citizens,” Sen. Hughes said. “I am pleased to know that so many of our people will benefit from these new investments in services and training, which will have a major impact in our communities across the Commonwealth of Pennsylvania. I thank Gov. Wolf for his support of vulnerable populations.”

Founded nearly a century and a half ago, Inglis’ mission is to enable people with disabilities — and those who care for them — to achieve their goals and live life to the fullest. The Inglis Innovation Center opened in December and is where all of Inglis’ community-based programming and services are headquartered. The governor and guests toured the center prior to the press conference.

“The investments I’ve outlined today support the recommendations issued by the Council on Reform,” Gov. Wolf said. “And will truly make a difference in the lives of the Pennsylvanians who need help the most. I look forward to working with the General Assembly to enact a budget that supports all Pennsylvanians, including our most vulnerable.”

Note: Photos and video from this event will be available at www.pacast.com.