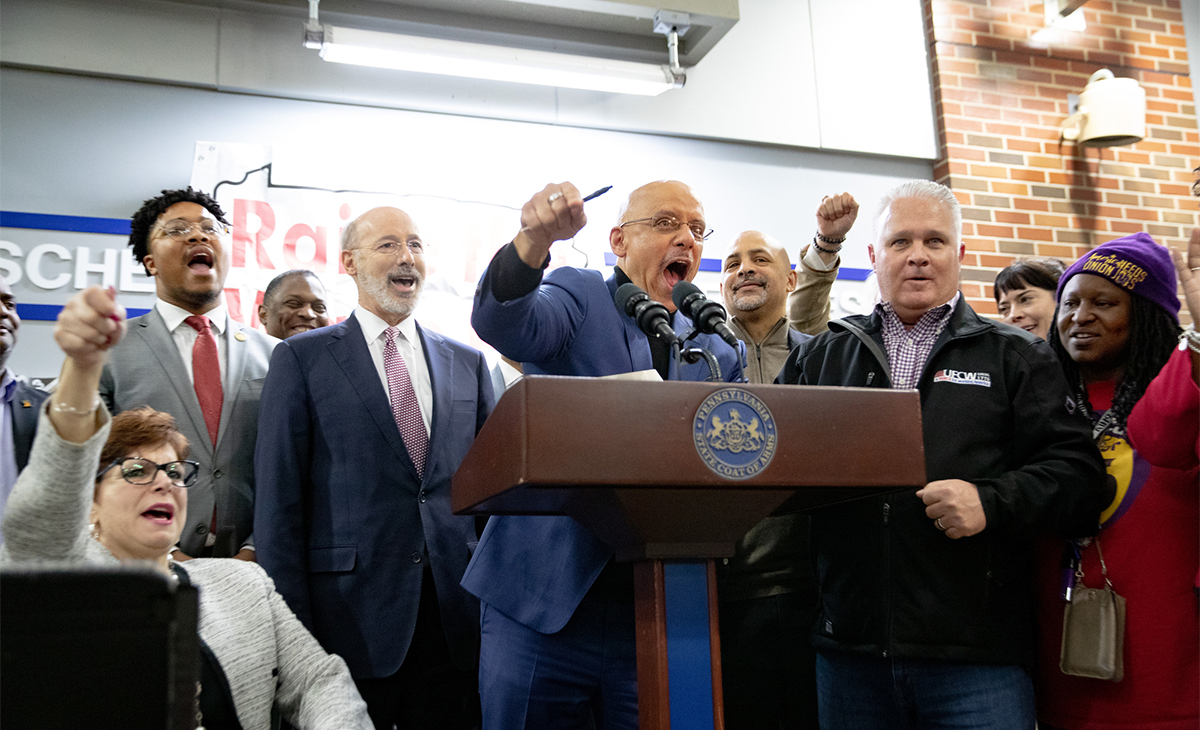 Philadelphia — February 8, 2019  – Governor Tom Wolf today held a Raise the Wage rally with legislators and advocacy groups as a reminder that it’s past time to raise Pennsylvania’s minimum wage to $12 an hour. The boost in pay would enable tens of thousands of people to work their way off of public assistance, saving taxpayers hundreds of millions of dollars and growing the economy for everyone.

“I’ve said it before, I’ll say it today, and I’ll keep saying it – it’s past time that we raise the wage in Pennsylvania,” Gov. Wolf said. “Pennsylvania must be a place where hard work is rewarded, but our minimum wage hasn’t changed in a decade and too many hardworking people are struggling to get by. We must raise the wage.”

Governor Wolf was joined by Mayor Jim Kenney, Sens. Christine Tartaglione and Vince Hughes, Representative Jason Dawkins, and representatives of Raise the Wage and Restaurant Opportunities Centers United, among many others, at the Frankford Transportation Center in northeast Philadelphia.

“I fought hard in 2006 when we were a leader in raising the minimum wage,” Sen. Hughes said. “Doubters said it wouldn’t happen, but we beat the odds and won. I believe we can secure victory once again and pave a better path for Pennsylvanians. It is unacceptable for our commonwealth to continue with a minimum wage that, by law, drives people into poverty.”

“Let’s be clear about the people who we’re going to help by raising the minimum wage,” said Sen. Christine M. Tartaglione, “It’s not just the teenagers who work at fast food restaurants, convenience stores, and other part-time, entry level jobs. The overwhelming majority of those who would see their paychecks get bigger – 90 percent in fact – are in their 20s or older. And half of them are full-time workers. On average, these folks earn more than half of their family’s total income. Raising the minimum wage to $12 this year would benefit more than one million Pennsylvania workers and their families.”

Pennsylvania’s minimum wage has been stuck at $7.25 an hour since 2009. Over the decade, 29 states, including all our neighboring states, have raised the wage floor for their workers.
The governor’s proposal raises the wage to $12 an hour on July 1, 2019, with gradual 50 cent increases until reaching $15 an hour in 2025. New Jersey recently became the fourth state on a pathway to a $15 minimum wage.

When workers are paid fairly, fewer people will need public assistance. At $12 an hour, nearly 17,000 adults will leave Medicaid next year and another 51,000 the following year. A portion of the savings will be re-invested to provide at least a $12 minimum wage for workers providing Department of Human Services-supported childcare and home care for seniors and people with disabilities.

With workers earning more and leaving the public safety net, taxpayers will save $36 million in Medicaid costs next year and $119 million the following year. The savings are achieved without raising taxes or increasing the size of government.

“I’ve been a homecare worker for 15 years and I love it, but the work is extremely challenging,” said Lolita Owens. “I don’t make enough to survive on my own. We need more homecare attendants to care for the state’s aging population, but without wages that workers can live on, half of the them will quit less than a year after they start.”

Governor Wolf also wants the state to transition to one fair minimum wage for all workers, as tipped workers are currently forced to survive on only $2.83 an hour plus tips. Tipping would continue, but workers, typically women, would not have to rely solely on consumers. Tipped workers are twice as likely to live in poverty compared with the overall workforce, and nearly half rely on public assistance. Pennsylvania’s tipped wage has been unchanged for 21 years, while seven other states have eliminated the subminimal wage for tipped workers.

Last year the governor put a similar plan into action for state workers. In June, he signed an executive order raising the minimum wage for employers under his jurisdiction to $12 an hour on July 1, 2018. The wage will gradually rise to $15 an hour in 2025.

“Raising the minimum wage lets people afford the basics, like food, rent and transportation, and saves each of us who are currently paying for their public benefits because their employers don’t pay them enough,” Gov. Wolf said. “Raising Pennsylvania’s minimum wage is the right thing to do.”