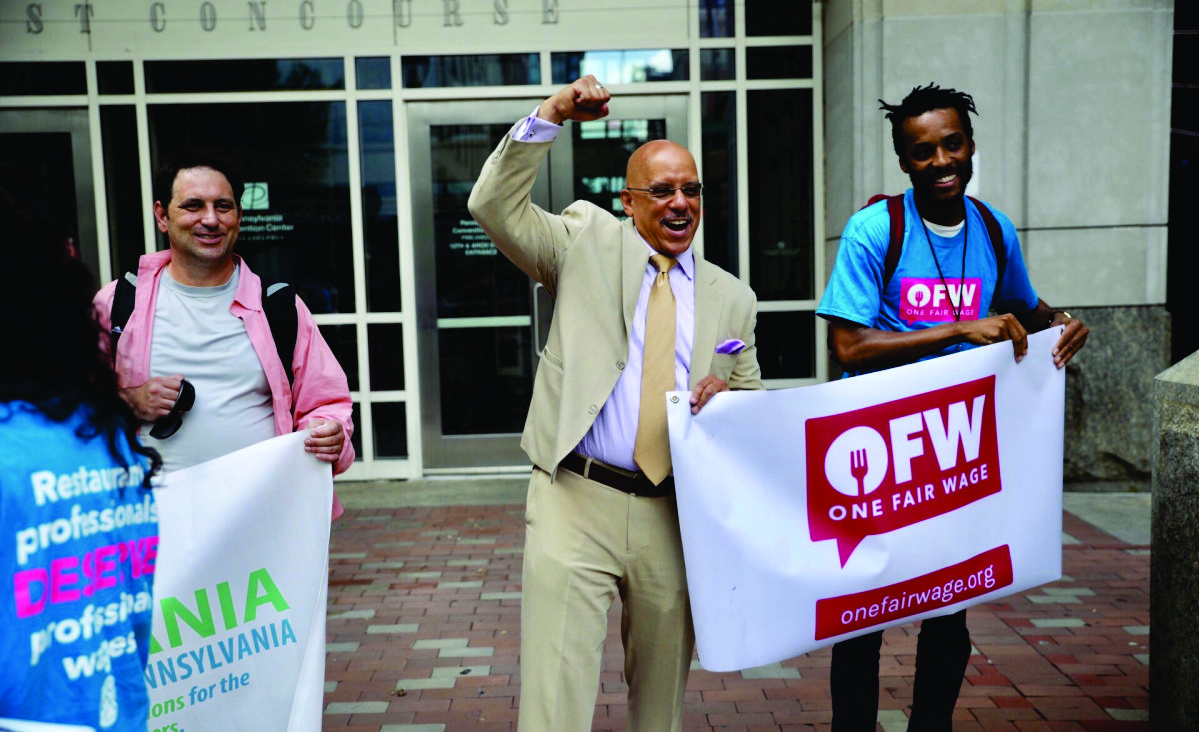 Philadelphia, PA − Julio 12, 2019 — A record number of state legislators waited tables for an hour Viernes afternoon at a restaurant in downtown Philadelphia in support of the federal Raise the Wage Act nationwide and One Fair Wage in the state.

The legislators underscored the importance of increasing the minimum wage to improve the lives of workers, help professionalize the restaurant industry, and boost the economy of Pennsylvania.

“People all across the commonwealth are struggling with economic insecurity, largely because of a minimum wage that imposes state-sanctioned poverty,” said Sen. Vincent Hughes, Democratic Chair of the Senate Appropriations Committee. “Raising the minimum wage to $15 an hour and eliminating a subminimum wage for tipped workers will give hardworking folks a chance at living with the dignity they deserve. Pennsylvania has not raised its minimum wage since 2006, and we cannot miss the opportunity to provide a better pathway for our people.”

The Raise the Wage Act calls for One Fair Wage — a policy that would require employ-ers to pay workers, including tipped workers, a full minimum wage of $15 an hour plus tips.

In Pennsylvania, Senators Christine Tartaglione (D-2nd District) and Art Haywood are the primary sponsors of state bills (SB 1044 and SB 1045, respectively) that pro-pose to increase the minimum wage to $12 and eliminate the subminimum wage for tipped workers. A companion bill to similar legislation was also introduced in the Pennsylvania House by Representatives Patty Kim (D-Dauphin) and Chris Rabb to raise the state’s long-stagnant minimum wage.

“Our communities of color shouldn’t have to choose between paying the bills and putting food on the table. I was proud to join ROC and other advocates in fighting to raise the minimum wage across the commonwealth so hardworking Pennsylvanians can afford to support their families and live their lives,” said Rep. Stephen Kinsey, chairman of the Pennsylvania Legislative Black Caucus.

“Minimum wage earners are not part-time workers or teens, they are breadwinners, parents and students. They are struggling – and they struggle because some employers would rather see them subsidize their livings by reaching for public service. In that way, the low minimum wage is very much a form of corporate welfare – allowing them to profit while they get away with underpaying workers,” according to Rep. Chris Rabb.

Before the legislators waited tables on Viernes, they marched from the Pennsylvania Convention Center to the restaurant. They were also joined by dozens of restaurant workers, labor advocates, community members and supporters of Raise the Wage Act and One Fair Wage.

“Every state surrounding Pennsylvania has increased their minimum wage and yet it re-mains stagnant here in the commonwealth. It is antiquated and, at this point, disgrace-ful,” said Rep. Joanna McClinton. “Too many Pennsylvanians must continue to work for what amounts to nothing in today’s economy, still struggling well below the poverty line to pay bills and provide for their families. An increased and fair wage would give these people more purchasing power and the ability to afford basic necessities, contributing more to our overall economy.”

With less than a week before the U.S. House of Representatives is expected to vote on the Raise the Wage Act, legislators emphasized the historic nature of the minimum wage issue in the country. The subminimum wage for tipped workers is a legacy of slavery. The first tipped workers in America were slaves who were paid nothing and expected to live on tips.

“A tipped wage system is inequitable, unjust, and hurts working families the most. To-day, almost 70 percent of tipped workers are women and they suffer from twice the poverty rate of the rest of US workers. No one working full-time should be living in poverty.

Restaurant workers and owners also shared their stories of the challenges with the sub-minimum wage for tipped workers, and spoke about how Raise the Wage Act and One Fair Wage policy will help reduce poverty, wage theft and sexual harassment in the workplace.

The restaurant industry has notoriously high rates of sexual harassment and wage theft and has shown an inability to self-police. To date, according to a recent ROC United study, the seven states — Alaska, California, Minnesota, Montana, Nevada, Oregon and Washington— with One Fair Wage workers have half the rates of sexual harassment and significantly less wage theft.